It is now December, and the holiday season is upon us. December is also a mont of high electricity usage.

In addition to more gatherings and parties (increased usage of lights and appliances), many are putting up their holiday lights for the season. But how much does it cost to light up a house? And what can be done to reduce the amount of electricity consumed? One way to save is to switch from incandescent to LED Christmas lights. 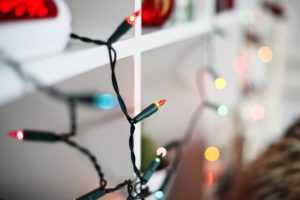 Many have been using the same strings of Christmas lights every year. These older lights are more likely to be the energy inefficient incandescent lights. A typical 100-light string consumes 50 watts of electricity per hour.

In California, electricity tends to be more expensive, and it is not uncommon for utility companies to charge 32¢ per kilowatt. That means lighting up for the holiday season using the older incandescent Christmas lights, assuming 180 kilowatts of electricity is consumed, could be $57.60.

So what can be done to reduce the amount of electricity used? The alternative is using LED light strings, which produce similar lighting and only consume 4.5 watts per hour each.

Assuming each is lit for the same amount (6 hours a day over 30 days), each will only consume 810 watts (vs 9000 watts) for the holiday season. Together, a group of 20 will only consume 16,200 watts or 16.2 kilowatts of electricity. That is a 91% reduction in electricity consumption!

Converting this into dollars using the same rate (32¢ per kilowatt), using 20 LED Christmas lights is only $5.18, a savings of $52.42! While there is an initial cost for purchasing LED Christmas lights, when used over the years, there will be long term savings.